I have a hidden — and ultimately useless — talent. My husband calls it “English Majoring.” As in, I don’t understand why some of the songs in Les Miserables have the same melody, can you English Major that? And I can make up, on the spot, a plausible — and maybe even correct — answer, seamlessly tied to the themes and motivations of the characters and plot. Totally useless, I know, and painfully nerdy. But, the thing is, I really love English Majoring — it’s like a doing  a puzzle — and, sometimes, I hit on something kind of neat. Like this: have you ever noticed that Disney’s Beauty and the Beast and Andrew Lloyd Webber’s The Phantom of the Opera (two of my all-time favorite stories) are actually mirror images of each other? Care to watch an English Major at work? Let’s begin.

In Beauty and the Beast, the Beast begins as a prince who is handsome on the outside but cruel on the inside. The Phantom —- we learn from Madame Giry’s story to Raul — was born deformed and was initially good. Each man begins his story with his inner self at odds with his outer self, but they are mirror images of each other — one handsome, one ugly. 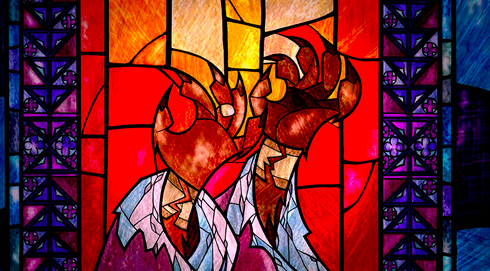 Through the enchantress’ curse, the Beast’s outside is changed to match his inside. He becomes ugly because his inner self is ugly too. Through mistreatment and abuse as a child and young adult, the Phantom’s inside is changed to match his outside. He becomes cruel, vindictive, and murderous because his outer self made it so no one could love him. Both men undergo a change so that their two selves — inner and outer — match. And both become ugly, inside and out. But they get there in opposite ways — the Beast changing his outside, the Phantom changing his inside.

Once both men have become monsters, they allow their base urges to take over. For the Beast, this means allowing all his masculine physicality to reign supreme. His sexuality, his brute force, his anger made manifest in yelling and throwing things around — all his physical urges unleashed and unchecked. For the Phantom, it means allowing his passions to run wild. He lets his music send him into a kind of frenzy. He allows his anger to drive him to murder. He uses his lust as justification for kidnapping Christine.

And then they each meet a girl. Belle is a self-possessed, internally strong heroine who knows who she is and what she wants. It’s her bravery that brings her to the Beast’s castle in the first place — following her father and offering herself in exchange for his freedom. Though the Beast frightens her, she never gives in to him, or allows him to get away with the kind of unchecked masculinity that he’s been used to. Christine, on the other hand, is Belle’s mirror image. She’s an ingenue. She doesn’t know who she is or what she wants. When the Phantom opens her eyes to a world of music and sex, she’s drawn in — allowing the Phantom to continue down his path of inner destruction.

Both Belle and Christine are drawn to the raw masculine energy of their men. It is initially the Beast’s ability to physically protect her that causes Belle to reconsider her impression that the Beast is completely evil. And Christine, of course, finds the Phantom’s seduction through music to be a kind of sexual awakening — one that isn’t altogether unwelcome. For both Belle and Christine, the thrum of masculinity is part of the appeal.

Both stories offer their heroines an alternative suitor. Gaston is ugly on the inside but handsome on the outside — much like the Beast was when he was a prince. But Gaston is unable — and unwilling — to check his masculine urges, allowing them, instead, to dictate his actions. Raoul is also handsome on the outside but — in a mirror image of Gaston — he’s passionless on the inside. He is, for lack of a better word, boring. His love for Christine is real but almost chaste — it lacks the fire and intensity of the Phantom’s obsession with her.

Because Belle is able to stay true to herself, the Beast is able to transform himself into a man. Eventually, his external beastliness doesn’t match the internal goodness that Belle has helped draw out. There’s “something there that wasn’t there before.” When the Beast’s internal self becomes as beautiful as his original princely form the spell is broken and he is allowed to become a man again so that inner and outer can match once more.

Because Christine isn’t able to fully withstand the Phantom’s advances, she can’t redeem him and he passes “the point of no return,” sending the chandelier crashing down on the audience, and murdering Piangi. He can’t come back from this and must remain a monster. “This haunted face holds no horror for me now,” Christine tells him. “It’s in your soul that the true distortion lies.” The Phantom’s inner and outer selves also match at the end, but in the opposite way to the Beast.

Christine does, eventually, realize that she could have saved the Phantom and tries to correct her mistake. “Pitiful creature of darkness, what kind of life have you known?” she asks him. She sees, finally, that (in a mirror image to the Beast’s experience) it was the cruelty of the people around him that initially made the Phantom act the way he did. And she sees, too, that kindness and fortitude from her could have redeemed him. “God give me courage to show you you are not alone!” she says, and kisses his deformed face.

Both Belle and Christine end up seeing past the ugliness of their men. But, for the Phantom, it’s too late. Christine’s kiss is not the transformative breaker of spells. Her inner self wasn’t strong enough to check the Phantom’s passions. In the end, all she can do is show him that she sees past his ugliness and recognizes him as a man, not a monster. But, unlike the Beast, he’s not the kind of man who’s worthy of her love.

See? A totally worthless talent. Unless you love these stories like I do. Then, maybe, just maybe, I’ve found my calling.