An old flame came back into my life this week. On social media, of course, (is there anywhere else to reconnect with old flames?). It was very unexpected. In fact, back when I’d been in love with him I’d been sure he didn’t even know I existed. How could he? We lived in two completely different worlds. I was in London, England and he was in a small French town inside my television set. But, just this week, there he was again, flooding my Twitter feed with likes and retweets all because I happened to include him in a meme. It’s so like him, really, to want to lap up all the praise and applause — it never would have worked between us, he’s much too self-centered. But I’m grateful for the new Twitter followers he brought me. And for the memories. 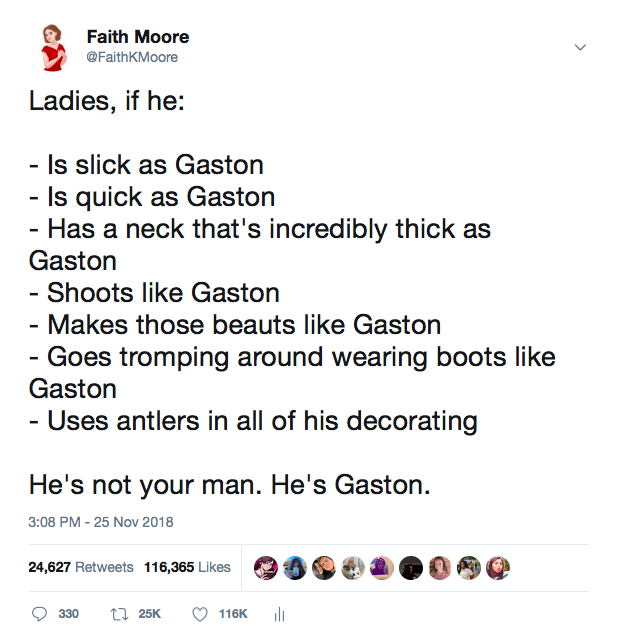 He’s not your man, he’s . . . a cartoon. Okay, fine, yes, technically this old flame is not actually a real person. But, don’t let that fool you. For about three years my feelings for Gaston (from Disney’s Beauty and the Beast) were very, very real. He was my first Disney crush. And, I know (I know) Gaston is the bad guy. But I don’t regret a single minute of it. Not even a little bit. Because Gaston taught me something. And so did my next Disney crush (the Beast, obviously) after that. Here, let me explain.

Beauty and the Beast came out in 1991, the year I turned nine. I was already a big Disney fan, but this movie sealed the deal for me. It wasn’t just Gaston. It was everything. The animation, the songs, the story, and (of course) Belle.

I recognized, even then, that the Beast was who Belle should end up with, and that she was right to refuse Gaston’s offer of marriage and dismiss him as a brainless jerk. I could even see that, by the end, Gaston’s ego-driven lust for Belle had led him to acts of actual evil, resulting in his ultimate demise. But I didn’t care. For a girl just beginning to think about romantic attachments, Gaston was exactly what I was looking for: a man.

From the safety of my living room, I learned to appreciate a deep booming voice, a winning smile, enormous muscles, and a cleft chin. Gaston oozed masculinity in a way that no other Disney cartoon character had done before. But safely, in a way that no non-cartoon man could have done. And while, even at nine, I was able to understand that Gaston, himself, was hopelessly flawed and not at all worthy of our heroine’s love, there was something so male about him, and it spoke to me.

It wasn’t until three years later, in 1994, that I learned to love the Beast. That April, Beauty and the Beast had hit Broadway, the first of Disney’s musical theater productions. I was 12 then, visiting my grandparents in New York City, and, as chance would have it, seeing the show for the first time with a boy.

My grandparents, awesomely glamorous and hip for old people, had gotten tickets to the show and were taking me and their friends who had a son my age. At the time, I was attending an all-girls school, so talking to boys (let alone attending the theater with them) was not something I was in the habit of doing. It was, however, something I wanted very much to be in the habit of doing.

This boy was very nice — chivalrous even. Before the show, he took me up in the glass elevator at the Marriott Marquis hotel in Times Square. Up and up and up we rose, leaving the grown-ups behind and soaring, in a blaze of enormous lightbulbs attached to the outside of the elevator, to the top floor where we had a view of Broadway. I half expected him to kiss me right then and there. Of course, we’d only just met, so that was fairly optimistic.

Before the show, he told me to follow him, and led me down the center aisle to the railing that overlooked the orchestra pit. Only a few of the musicians were in their seats, which seemed to disappoint him. He’d been hoping to impress me and this was a meager showing. But I was very enthusiastic, touched that he’d wanted to impress me at all, given that I was an awkwardly tall, frizzy-haired twelve-year-old, wearing a dorky denim dress from Anne Taylor. He didn’t kiss me then either.

But, when the show started, my budding flirtation was utterly forgotten. There, in real life, were the characters I’d come to view as old friends. But new, also, fleshed out, given deeper back-stories and more complicated motivations. And it was the Beast, whose character really isn’t all that developed in the animated movie, who leapt off the stage and claimed my heart.

In all the ways that Gaston embodied the physicality of maleness, the Beast embodied the essential nature of men. He was independent, proud, and set in his ways. But he was also determined, eager to please, and earnest in his desire to learn. He was brave, loyal, and honest. And he loved with his whole heart, unashamedly, joyfully, and proudly. He was a man. In Beast’s clothing.

The boy I saw the show with never kissed me. We were pen pals for a while and I had a crush on him, of course, since there was no one else real to have a crush on. But my heart belonged to the Beast. And he taught me what to look for in a man.

And, eventually, I met a man who measured up in every way. So I married him. He still measures up. Every day. Maybe it sounds ridiculous to say that I chose my husband based on traits I learned from a Disney movie. But it’s worked out pretty well for me.

So, welcome to all my new followers! I’m so glad Gaston led you here to me. As for Gaston himself, well, he’s about twenty-four years too late. He’ll have to find himself some other girl. I’m taken.

14 thoughts on ““My What A Guy!” — Real Life Lessons From Cartoon Crushes”