In the age of modern feminism, the men in Disney princess movies have become a bit of a conundrum. What does “happily ever after” look like to a “woke” feminist princess — does it include a man at all? When Disney began to grapple with this question in the early ’90s, there was one thing for certain: Prince Charming had to go.

In the early days of Disney, the princess’ love interest was always some version of Prince Charming. He was handsome, valiant, and unwaveringly devoted to his princess. Snow White’s prince, Cinderella’s Prince Charming, Aurora’s Prince Phillip, and even Ariel’s Prince Eric were all versions of this same trope — the “handsome prince” of the “happily ever after.” But, as Disney filmmakers began consciously infusing feminism into their films, this version of the prince no longer fit the ideological narrative.

Instead of the “archetypal Damsel in Distress, waiting to be rescued by her very own Prince Charming and be whisked off into the sunset” (Stylist), feminist princesses must demonstrate their ability to hold their own without male intervention. But, if the prince can no longer be the princess’ valiant rescuer, who exactly can he be? What type of man is worthy of a “feminist” princess?

Disney’s initial attempt to create a new kind of prince — in Beauty and the Beast — was met with negativity from the feminist set. Peggy Orenstein — whose book, Cinderella Ate My Daughter, is critical of fairy tales and Disney — said in an interview that Beauty and the Beast claims that the “right woman can ‘tame’ a beastly, abusive, troubled man and turn him into a prince.” (This is a total misrepresentation of this film, and you can read my post on the symbolism of monstrous lovers here, but we’ll leave that alone for now.) Feminists complained that you can’t change a jerk into a great guy — and fair enough — but there’s one little problem: every single “feminist” princess does exactly that.

Beginning in the 1990s, Disney filmmakers began to give their princesses men in need of a feminist makeover. These princes needed to “get woke,” and the princesses were just the girls to help them. Jasmine (from Aladdin) spends most of the movie stomping around berating Aladdin for acting like an agent of the patriarchy. “I am not a prize to be won!” she spits at him. Pocahontas’s seduction of John Smith consists of a lecture on environmentalism and an insistence that he give up his entire belief system to be with her. Kristoff (from Frozen) is a “bit of a fixer-upper” who needs Anna’s help to learn that people are better than reindeer. 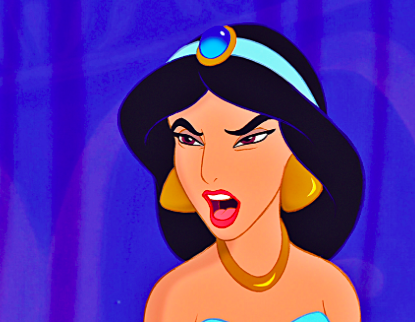 So, for all their complaining that men can’t change, Disney’s version of a “feminist” prince is exactly that guy: a man who can be taught by a woman to change his ways. The difference between all these “woke” princesses and Belle, of course, is that Belle doesn’t actually have an agenda. It is simply by virtue of her being completely and unequivocally herself that the Beast comes to want to be a man worthy of her love and, in realizing this, changes himself. But this is not enough for modern feminists. In order to be worthy of a “feminist” princess, the prince must let the woman berate him into submission. She has to mean to change him from a jerk, into a good guy. Which they told us was anti-feminist. But there you have it.

If the prince is willing to be browbeaten into submission by an angry, sanctimonious princess, he’s probably not the kind of man an actual princess — or young woman — is going to find attractive. But at least he’s a far cry from Prince Charming. So . . . there’s that.

2 thoughts on ““Someday My Prince Will Come” . . . To Agree With Me About Everything. Disney Princes In The Age Of Feminism”