The following is a modern fairy tale, written by me and illustrated by Laurel Sprenger. Scroll down for a video version!

Once upon a time there was a girl whose heart was broken. She kept it by her bedside in a carved wooden box because she no longer had any use for it inside her body. She had tried, over the years, to mend her heart — with tape, or glue, or even needle and thread — but nothing ever seemed to work. So it stayed in its box, and life went on without it.

The girl remembered a time when her heart had been whole — full, and vital, and vibrant. It had lived inside her body then, and she had felt things that were lost to her now. To the girl, that time seems like a dream, viewed through a mist, and very far away.

She had given her heart away too freely. She knew that now. She had given it away to anyone who’d wanted it, and it always came back bruised, or dented, or — finally — cracked right in two. Now, she was sure, no one would want it ever again. It wasn’t much to look at, lying there in the carved wood box.

Whenever anyone inquired after it now she would offer something else — an arm, a knee, a little finger. And these things were taken, because they were all that was offered, and returned slightly the worse for wear. But that didn’t matter so much. Not as much as the heart.

Then, one day, someone came into the girl’s life who wouldn’t take her elbow, or her leg, or even her left hip. Only her heart would do, he said. And he left, taking nothing. But he was back the next day, and the day after that, inquiring when he’d be able to have her heart.

One day, after one of his visits, the girl sat on her bed and opened up the carved wood box that held her heart. It sat, on a strip of dingy white satin, broken and battered, not even really resembling a heart at all. And the girl tried to imagine giving her heart to the man who wanted it. She tried to picture his face when he opened the box and found this ruined thing inside, instead of a real heart. And she slammed the lid down hard, and fastened the box closed tight, and tried not to think of it.

But the man came back each day and asked, politely, if he might have her heart. And the girl grew to like the man and look forward to his visits. She offered him things to get him to stay — bits and pieces of her, that others had taken and returned without thanks. But he refused them. He told her that those things — her eye, her lip, a curl of hair resting on her neck — were beautiful, but that he didn’t want them if he couldn’t have her heart to go with them.

And a time came when the girl wanted to give the man her heart. But she was afraid. Surely the heart that she kept in the box by her bedside was not the sort of heart the man had in mind when he asked her — day after day — to be allowed to have it. Surely a heart like hers wasn’t worth the effort.

One night — late, when no one else was looking — the girl took the box from her bedside and carried it through the forest to a cold, dark place where an old woman lived who was said to know magic.

The girl showed the old woman her heart and asked if she could mend it. The woman stared at the heart a long time and then closed the lid on it and shoved the box aside. She would make the girl a new heart, she said. Brand new and strongly beating. She would trade this new heart for the girl’s old, broken one. When the girl asked what the old woman could possibly want with her old and broken heart, the woman just smiled at her and said nothing.

Eagerly, the girl relinquished her heart to the old woman and carried home the new heart in a little velvet sack which she wore around her neck. She placed the heart carefully in a drawer and waited for the man to come again and ask for it.

In time he did come, and she told him that she was ready to give him her heart. The man was overjoyed and gently took the velvet bag and reverently drew out the bright red pulsing heart. But it only took a moment for the man to recoil in horror, shoving the heart back into the bag and yanking on the string to make it close. The girl asked him what was the matter and he told her: this is not your heart.

The man didn’t come anymore after that. The new and beating heart stayed in the velvet bag in the drawer by the bedside, pulsing softly. The girl didn’t look at it. She knew, now, that she’d made a mistake. She tried to return the heart to the old woman in the woods in exchange for her own, broken heart. But the woman said that she was no longer its rightful owner and refused to let her in.

For days the girl sat, alone in her room, missing the man. Finally, she could bear it no longer and she put on her coat and her warmest winter boots and went out in search of him. 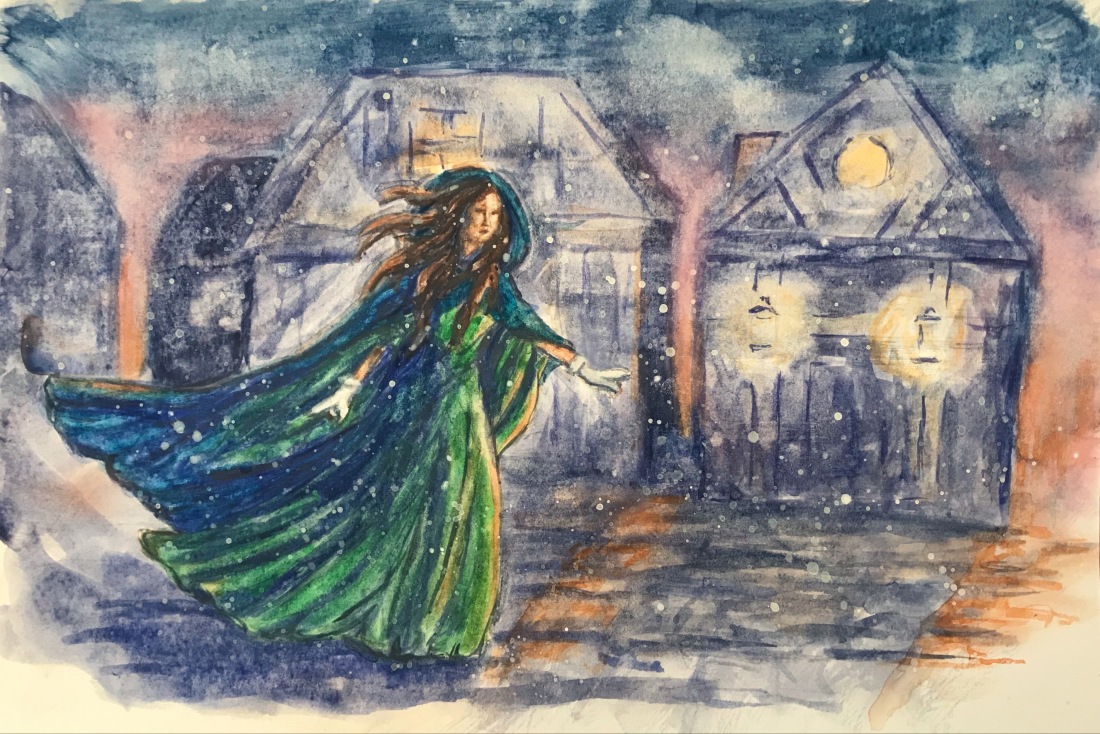 She didn’t know where he lived, but she inquired after him wherever she could and finally she came to his home and knocked on the door. When the man saw her his face was full of sadness but he let her in and asked her to sit down.

Though it frightened her terribly the girl told the man everything — because the thought of losing him forever was far more frightening than the thought of him knowing the truth. When she finished her story the man’s sadness turned to joy and he bundled her back into her coat as quickly as he could and whisked her off through the woods to the place where the old woman lived.

The old woman took one look at the man and nodded her wrinkled old head and drew out the carved wooden box from a secret drawer she kept under her dining room table. She handed the heart over to the man straightaway and ushered them out of her house and back out into the woods.

The man asked her if he might open the box and the girl — though frightened — said that he could. Gently, the man lifted the box’s wooden lid and stared down at its contents. For a moment the man said nothing at all and the girl was sure he would turn her away, now that he knew the state of her heart. But, instead, he turned to her with shining eyes and lifted the heart out of its box and held it in his palm. And he asked her to come closer so that she could look at it too.

The girl looked down at her heart in his hand and her eyes widened in surprise. The man took possession of her heart and placed it inside the girl’s body where it began to beat. It was whole — battered, and bruised, and scarred — but whole.

Watch the video version of the fairy tale below!